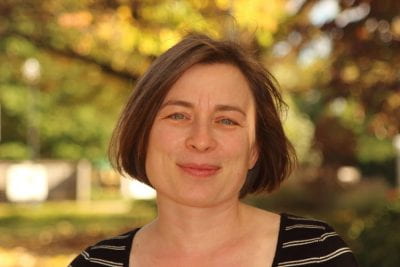 Susanne Rinner is a teacher-scholar and language advocate. She studied at the Freie Universität Berlin and Washington University in St. Louis, and completed her Ph.D. at Georgetown University in Washington DC. She taugh

t at a number of colleges and universities. From 2007 to 2019, Susanne was Associate Professor of German Studies and Director of Undergraduate Studies in German at the University of North Carolina at Greensboro where she taught German and German Studies courses at all levels. With a focus on twentieth century and contemporary German literature, film and culture, her interdisciplinary research interests include cultural memory and social movements, transnational and transcultural relations between the US and Germany, women and gender studies, modern language pedagogy, and curriculum development. Susanne enjoys working closely with students in and outside the classroom. With her scholarship and teaching, she contributes to the mission of the liberal arts in higher education and promotes language learning as a key to equity, diversity, and global exchange. From 2018 to 2019, Susanne served as President of the American Association of Teachers of German. Susanne has received numerous awards recognizing her scholarship, teaching, and service, including the AATG Friend of German Award.